One of the first things you cant help but notice in Colombia are all the vendors sitting in parks or street corners in plastic chairs handing out phones to customers to place a call. They are hard to miss since they sport lime green or orange vests, splattered with the names of the three major cell-phone providers: MoviStar, Comcel, and Tigo.  Since cell phones are perhaps even more ubiquitous here than in the US,  what explains the steady parade of folks requiring their services?

Shortly after you buy your first cell phone and recarga  buy minutes for it  you discover, with a bit of a shock  that the three providers offer a 'family' plan that charges users a whopping six to eight times more per minute (up to 400 pesos or about 22 cents) to call someone out of your network. Anyone with a rival companys phone is defined as being out of your network.

Hence these entrepreneurs, have stepped into the breach, armed with phones from all three companies that are stuffed in their pockets or dangling from chains, and charge between 99 and 200 pesos per minute. Folks to call friends, family, or anyone using a different provider, without being gouged.

When your cell phone company won't provide the kind of support you need, it's nice to know someone out there will (at least in Colombia). 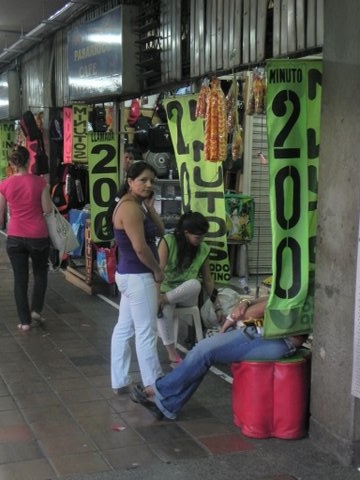